simple math, right? Well, that about explains the look I sometimes get when trying to explain prostate cancer screening to some of my patients. The topic can be hotly debated, controversial, and confusing even to medical experts. Yet, as a urologist I am charged with knowing how to concisely and eloquently have an informed conversation with men and their family members about prostate cancer screening, diagnosis and treatment, all within the succinct 20-30 minute office visit. No doubt, this conversation is often confounded by the misinformed “friend” or misguided advertising regarding the latest treatment in prostate cancer. This past April, there was quite the hype in the media regarding a change in recommendations by the United States Preventive Services Task Force (USPSTF), who changed their recommendation of prostate cancer screening from a ‘D’ back to draft recommendation of a ‘C’. This was a big deal.

Let’s break it down; who is the United States Preventive Services Task Force (USPSTF), what is the prostate and prostate cancer screening, and what does it all mean for the men of Montana?

So just who is the United States Preventive Services Task Force (USPSTF)? The United States Preventive Services Task Force (USPSTF) is a body of independent volunteers of primary care and prevention experts who systematically review medical evidence to develop official recommendations for clinical preventive services (1). Like childhood report card grades, their recommendations come with a letter grade, ‘A’ and ‘B’ is good (offer/provide service), ‘C’ not so good, but passing (offer/provide service for selected patients depending on individual circumstances), ‘D’ not recommended (discourage use), and ‘I’ for incomplete/insufficient evidence to make an official recommendation. Furthermore, it’s from these recommendations that payers (think insurance companies) create their own policies on what tests and procedures they will pay for. Clearly, one can quickly see that these recommendations carry enormous financial and health implications –doctors, patients, and insurers alike take them very seriously.

What in the world is the prostate (pronounced “Pra-state”) and why do men have one? The prostate is a walnut to small plum sized gland found below the bladder in men; the urethra (pee tube) runs through it and its job is to produce the fluid in the ejaculate to protect and nourish sperm for reproduction. For the most part it grows during puberty and then again during middle age. For such a small gland it’s often at the center of a host of men’s health issues. 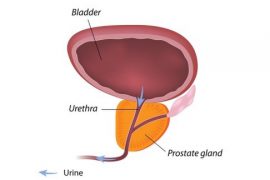 Dr. Richard “Rick” Slater specializes in adult and pediatric urology. He is board eligible in urology and is actively involved in the American Urological Association, Endourological Society and the American College of Surgeons.